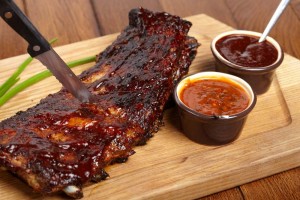 There is nothing like delving into a plate of deliciously sauced meat that just came off of a grill or a smoker. It should come as no surprise that in the great state of Texas, they take their BBQ very seriously. The sauce and style depends on the region. Some use a dry rub, some like the sweet and tangy sauce, and some like it a little bit spicy. Although there are most likely hundreds of places for you to get elbow deep in sauce in the Lone Star state, these are some which stand out from the rest. Come with Island Trader Vacations as we review 3 of Texas Best BBQ.

Franklin Barbeque in Austin started small, originally in a trailer. The pitmaster Aaron Franklin has since moved to a brick and mortar location. He builds his own smokers, and has put the city on the map for having some of the best smoked meats in the world. Many of the meats are topped with their unique espresso barbeque sauce. If you love it, you can know take it home with you in the bottle. This place is much beloved and don’t be surprised if there is a line at 9am when they open. That’s how amazing it is.

Killen’s BBQ is run by Le Cordon Bleu trained Chef Ronnie Killen. Killen’s is located in Pearland and the chef just so happens to own the steakhouse right next door. The beef ribs are infamous, as are the sides of mac n’cheese and creamed corn. Plan on getting here early, they only serve until the food runs out for the day. If you are standing in line during the weekend you get a free cold beer. Kind of makes the wait worth it.

Pizzitola’s Bar-B-Cue in Houston is famous for their spare ribs. The flavor might come from their 70 year old hickory fired open brick BBQ pits. The seasoned pits impart 7 decades of BBQ genius into the meat that is cooked over them. That is the type of flavor you just can’t buy or simply create. They only use a simple salt and pepper rub as the pits impart so much flavor on their own into the meats. These will are guaranteed to please the most avid BBQ snob.

People in Texas are passionate about their BBQ, and if you actually ask there might be quite a debate on who is the best. My suggestion, you’re just going to have to hit them all to make an educated choice. Then you can weigh in on the debate.